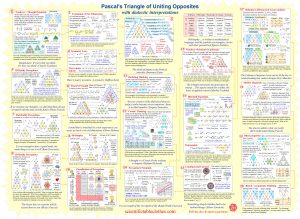 If your kitchen table was covered with soundly explained math equations or physical formulas, your kids would probably fall in love with them: whatever surrounds us, eventually becomes a part of us …

There is one problem though: math equations and physical formulas are not „objective truths” given us by God or Nature, but rather theories and hypotheses driven by certain ideologies. The major (mainstream) ideology represents the world as a „dead” sum of non-interacting parts (1+1=2). Another (much more attractive) view is that the world is a living creature, consisting of highly inter-related, alive parts, often yielding 1+1 > 2, although sometimes < 2. To unite both views, each tablecloth has to cover some „unusual” concepts that go beyond the ordinary school program:

Treat your kids as super-geniuses, and they will tend to become such. Surround them with complex information, and they will deal with it. Encourage kids to play with it:

Board Game for kids & adults

Board game for kids (another version)

Many teachers tend to „run away” from what they don’t understand (e.g. Maxwell’s equations or Clifford algebra in physics), while insisting on „one-sided” (a.k.a. dogmatic) interpretations …  so kids become as limited as they are:

Men are born ignorant, not stupid; they are made stupid by education (Bertrand Russell)

How to change it? Stop indoctrinating, start looking for new worldviews and interpretations. Instead of „running away” from what you don’t understand, try to „make friends” with it.  Try to „sense the Dao” – what opposing paradigms does it unite? How (natural or artificial) does it feel in general?

One part of us tries to analyze, split information into pieces based on pure logic and reasoning. Yet another part – to make sense of the whole „entirety” of information without splitting, based on our deeper feelings and self-analysis:

It ain’t what you don’t know that gets you into trouble. It’s what you know for sure that just ain’t so (Mark Twain)

I seek help from other scientists / philosophers to get simpler interpretations of complex concepts:

The goal of science is not so much in acquiring new data, but in finding new, more elegant explanations to the old, well-known truths

Each tablecloth should cover the most appropriate topics with the most relevant („two-sided”) explanations. New tablecloths will be coming for Calculus, Periodic Table, General Chemistry, Biology, and hopefully other topics and directions